In This Issue: On Crypto Cycles, and What Could Stop This Bear Market and Ignite the Next Bull Run

We are in the midst of a brutal crypto bear market.

The media has been quick to pick up on this trend and extrapolate it down to zero.

Sure, they say, crypto has had pullbacks before. But this time it’s different.

It’s easy to understand the appeal of this message. Bear markets are hard, and this is arguably the most vicious bear market in crypto’s history. But while the intensity of the decline is remarkable, if you zoom out just a bit, the contours look shockingly familiar.

Consider the table below, which shows the annual returns of bitcoin since it started trading in 2011.

The four-year cyclicality of crypto jumps off the page. If you’re wondering why you didn’t sell at the end of 2021, you’re not alone: Hindsight is 20/20.

But rueing the past as you consider this pattern will not help. Instead, you should look to the future. Because the drivers of crypto’s cyclicality show you where to look if you want to find the next potential big bull market.

The most common explanation for crypto’s cyclicality is that it is driven by bitcoin’s halving cycle. Every four years, like clockwork, the amount of new bitcoin being produced falls in half. This makes bitcoin more scarce, which, the theory goes, makes the price go up.

I wish this were true.

If the bitcoin halving actually drove prices, and you could count on the four-year return pattern to persist, investing would be easy. Just wait until the end of this year, pile in, and then wait for three years before you sell. Eventually you’ll be a billionaire.

Alas, it’s not that easy.

Even if it does have an impact, the halving theory can’t explain the entirety of crypto cycles for multiple reasons:

While halvings matter to some degree, they can’t and don’t explain the vast majority of crypto’s historical returns.

I have a much simpler view of what drives crypto’s cyclicality: Prices rise when the industry discovers products people want to use.

In 2017, the story was different. Ethereum was created in 2015, offering a more flexible blockchain than bitcoin. Entrepreneurs spent years figuring out what to do with its new capabilities. In 2017, they found a killer app: the initial coin offering (ICO). It turns out you could use the Ethereum blockchain to raise money for new projects, in a manner similar to an initial public offering (IPO).

While ICOs operated in a regulatory gray area and were often of dubious quality, they were also highly popular: Investors poured more than $4.5 billion into ICOs in 2017.

Stablecoins, decentralized finance (DeFi), and non-fungible tokens (NFTs) all came into bloom during this period. Consider that from March 1, 2020 through November 30, 2021:

NFTs STORMED INTO THE MAINSTREAM IN AUGUST 2021 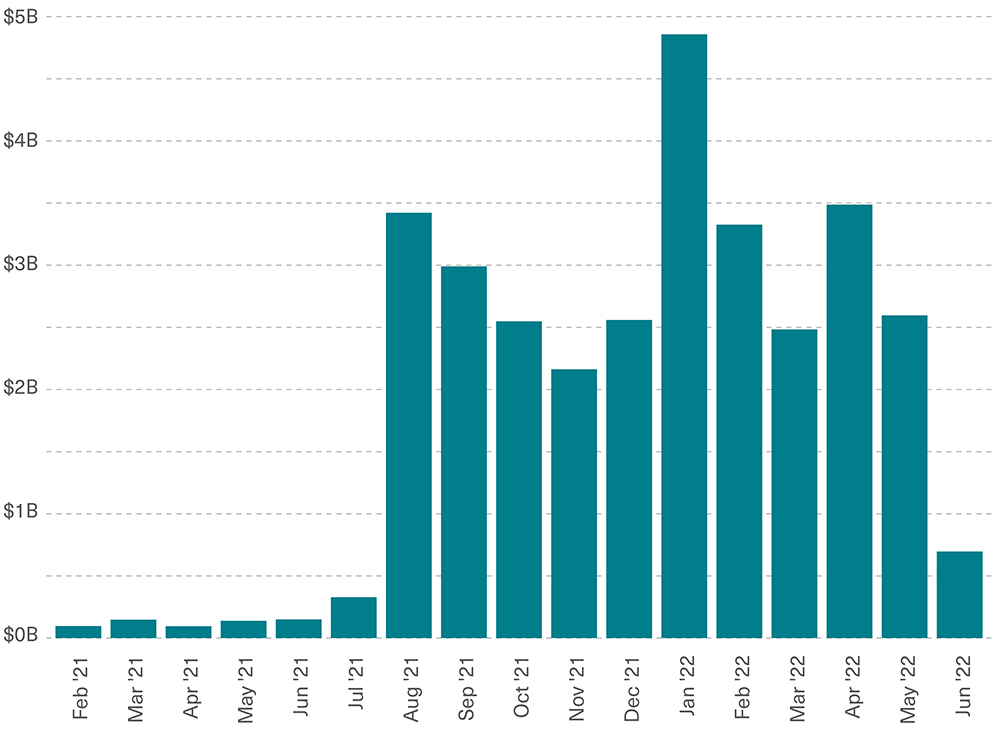 Unfortunately, just as quickly as these booms arose, they receded. In each case, we can point to a singular event that ended the bull run:

Critics will look at this list and ask, why bother? If the tide goes out as quickly as it comes in, investing is simply a game of chance, unmoored to actual value creation.

The answer, of course, is that historically each wave is bigger than the last.

Yes, the ICO crackdown sent us into a crypto winter … but the ICOs acted as a proof of concept for the DeFi boom in 2020.

And yes, the risk-off environment has taken the starch out of the NFT and DeFi markets, but both are still significant. As are stablecoins. Moreover, the surrounding boom brought to the space billions in venture capital that should open the door to more building.

Where Do We Go From Here?

All of which brings us to today.

In the short term, crypto’s fate rests on the outlook for the macro environment and the ongoing crypto deleveraging process. But our simple mental model—that crypto’s cycle is driven by delivering products that people want to use—paints a much brighter picture. Looking out, not over two months but over two years, the preconditions for the next potential bull market are easy to spot.

You still have the core capabilities of crypto and blockchains: moving money and financial goods at the speed of the internet; allowing developers to program money like software; and creating digital property rights. On top of that, you have the $33 billion in venture capital that flowed into the crypto ecosystem in 2021; record numbers of developers operating in the crypto market; and an improving regulatory environment. In addition, the core technology behind the boom—blockchain itself—is improving quickly. Within the next few years, Ethereum’s throughput is expected to increase 1,000-fold or more. And already, alternative blockchains like Solana and scalability solutions like Polygon are lowering fees and improving bandwidth. This creates a playground for entrepreneurs to build the next big thing.

What could that be? It’s hard to say, but these are some areas I’m keeping an eye on:

If this looks like a laundry list, that’s because it is. There is so much bubbling beneath the surface of the crypto bear market that it’s hard not to be excited about what’s next.

Every major bull market in crypto’s history has been started by a breakthrough product. This one is likely to be the same.

Notes From the Research Desk

Our research team captures some of crypto’s biggest themes and highlights in a word (or so).

What does a recession mean for crypto?

From David Lawant, Director of Research

Once the shockwaves of the current crypto credit crisis settle down, I suspect the next question on investors’ minds will be, how does crypto fare in a recessionary environment?

While the jury is still out on whether a recession will come to the U.S., over the last month market consensus seems to be slowly moving in this direction. Economists from Bloomberg and Goldman Sachs, for instance, recently put the chances of a recession over the next 12 months at 38% and 30%, respectively, up from essentially zero a few months ago.

If this scenario materializes, I think an interesting question will be whether economic downturns, which tend to directly affect many companies' revenues and earnings, will also affect crypto. In normal times, crypto tends to respond most to fundamental drivers other than earnings, such as technological development, regulatory developments, and broader public adoption.

DeFi lenders: from outlaws to outliers.

Amid a sweeping credit crisis, blue-chip DeFi lenders have emerged as crypto’s dark horse. While centralized crypto lenders like Celsius faced insolvency in recent weeks, decentralized lending protocols like Aave, Compound, and Maker proved resilient. And as crypto hedge funds like Three Arrows Capital were collapsing and ghosting creditors, DeFi lenders were autonomously processing margin calls and liquidations as designed. In fact, June’s $160 million in DeFi liquidations was in line with the monthly average—all at a time when centralized finance competitors were imploding. And while it’s true that DeFi assets have suffered alongside other crypto assets, there’s a bigger story: The resilience of leading DeFi lenders in extreme markets has shown the strength of their risk management systems.

It’s been a tough month for crypto miners. The combination of rising energy costs, falling crypto prices, and hefty liabilities incurred during the bull run have put new pressure on the companies responsible for validating blockchain transactions and securing crypto networks.

One recent example: Marathon Digital Holdings (MARA) saw more than 75% of its mining operations halted after a major storm took out a power station in Montana, highlighting the critical importance of risk management. (The company expects some of the 30,000 rigs to come back online in early July.) And in June, publicly traded miners sold more bitcoin than they produced, a contributing factor to bitcoin’s 57% year-to-date decline.

There are a few silver linings, however: 1) As of Q1 2022, the cost of mining bitcoin for public miners ranged from roughly $6,000 to $18,000, which means most miners are still profitable or near breakeven at today’s prices; and 2) Many miners accumulated significant cash and bitcoin reserves during the run-up, giving them the clout to not only weather a downturn but continue building. 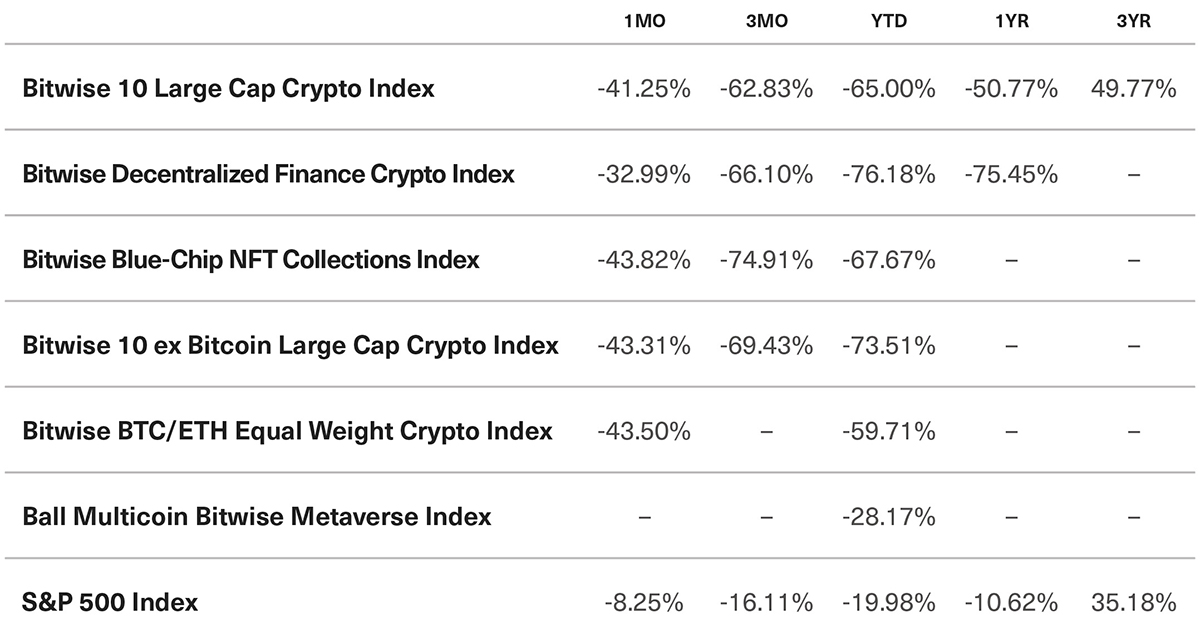 On June 29, the SEC rejected applications from Bitwise and Grayscale for spot bitcoin ETFs. It was a disappointing result, particularly considering the potential for ETFs to reduce costs, increase transparency, and raise investor protections.

What do bitcoin miners do? How are their businesses faring in the downturn? And why could some of them be well positioned to lead a bitcoin recovery? Our research team has answers.

Our latest batch of 30-second videos on CNBC featured Bitwise CEO Hunter Horsley discussing a staggering statistic on crypto wallets, the reason there are 10,000 crypto assets, and why crypto indexes can be so powerful.

Going to any of these upcoming events? So is Bitwise. We’d love to connect in person. Email advisors@bitwiseinvestments.com if you’d like to set up a one-on-one meeting.

Where Do We Stand in the Crypto Market Cycle? Leveraging On-Chain Data to Contextualize Key Market Trends