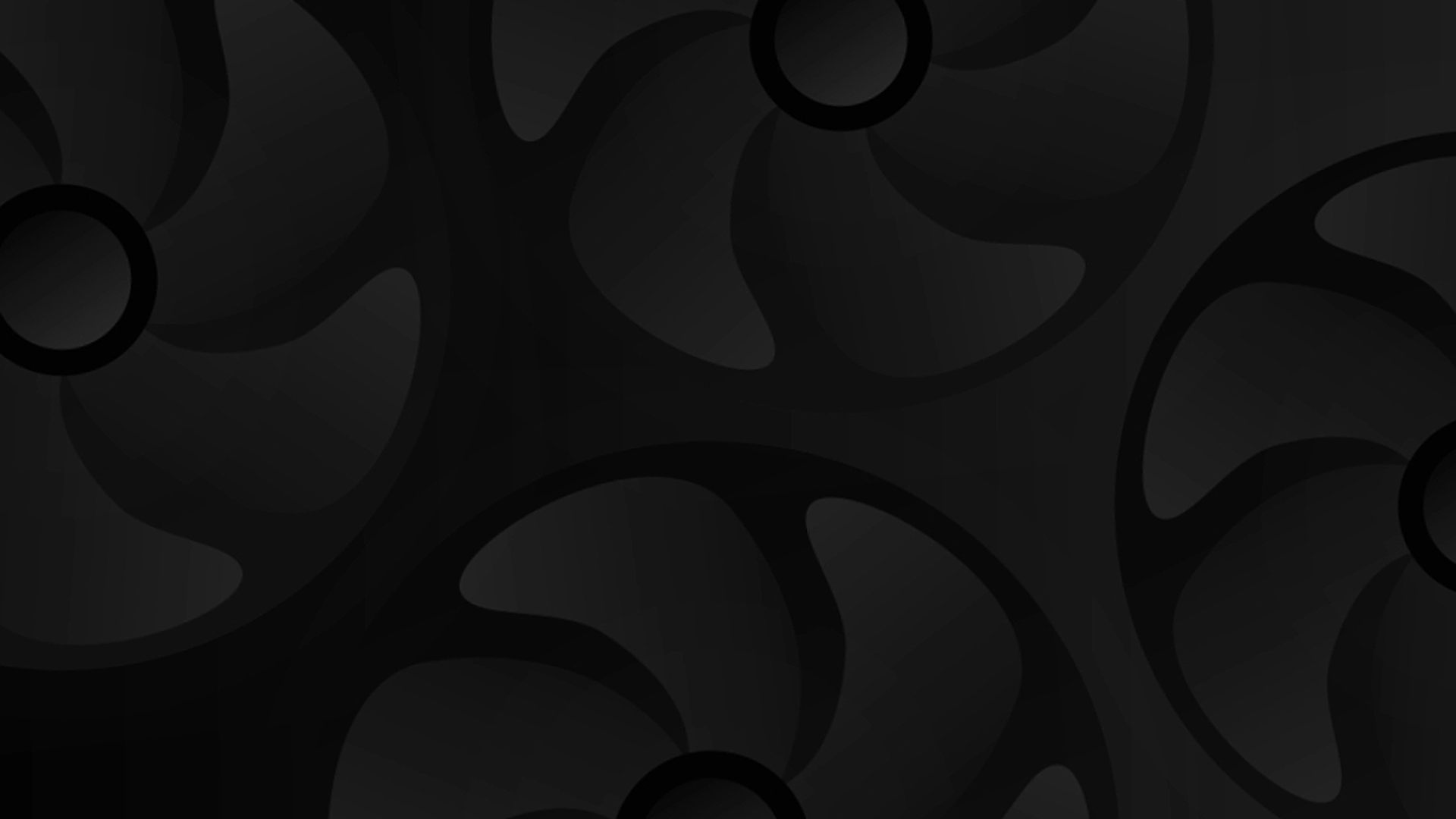 Commodity mining stocks are generally more volatile than their associated commodities. For example, if the price of gold goes up 10%, the earnings of a gold mining company will tend to go up more than 10%. This occurs chiefly because the company’s costs are not linked to the price of gold, giving them earnings leverage to changes in gold’s price.

For investors, this leveraged relationship can make miners an efficient way to gain exposure to a given commodity market during rising markets. Of course, the opposite is true on the way down.

We’ve seen this pattern play out in the bitcoin mining space. Companies like Marathon Digital Holdings (MARA), Riot Blockchain (RIOT), and Hut 8 Mining (HUT:CN) outperformed bitcoin by up to five times between 2020 and 2021. But they have significantly underperformed in the current bear market cycle: Bitcoin is down about 65% from its latest peak so far, but mining stocks are down 85% on average over the same period.

For investors who are bullish on bitcoin's long-term price direction, this might create an interesting entry point … if you assume that these companies will rebound when bitcoin does. In this piece, we examine the state of bitcoin miners and ask if they are positioned to lead a potential bitcoin price recovery scenario.

While Bitcoin Is Down 65% From Its Peak, Bitcoin Mining Stocks Are Down 74-97% in the Same Period

Setting the Stage: A Recap of the Bitcoin Mining Business Model

Before we dig into the current state of the market, it’s worth starting with a fundamental review of the bitcoin mining business model.

Bitcoin mining is actually quite simple.¹ Miners take part in one of bitcoin’s key security mechanisms, called Proof-of-Work.  Essentially, they compete with other miners in a race to solve a cryptographic puzzle. The winner of each one of these races—a new one takes place every 10 minutes on average—earns the right to propose a new block of transactions to be settled on the network. If accepted, the miner is rewarded with the issuance of newly minted bitcoin and the accrual of embedded transaction fees. And even after the sharp correction in bitcoin prices, this is a big business: The total revenue pool for bitcoin miners currently stands at about $8 billion per year.

The bitcoin mining business model, while straightforward, is not easy to implement at scale. Procuring, setting up, and operating tens of thousands of mining machines in an environment riddled with cutthroat competition and supply chain bottlenecks is hard. Also, bitcoin’s highly cyclical nature means operators need to keep a close eye on profit margins and balance sheet strength at all times.

So how have miners done in the current environment? And are they well positioned to thrive if and when bitcoin’s price recovers?

To find out, we have to consider the three drivers of a miner’s success.

Bitcoin mining is almost a programmatic business. The bigger share of total bitcoin mining power ( “hash rate”) you have, the more revenue you will generate from bitcoin mining rewards. So, the primary measure of a bitcoin miner’s operational success is simple: How much are they growing their hash rate relative to other mining operators?

For U.S. miners the answer is, actually, quite well.

According to the latest data available from the Centre for Alternative Finance of the University of Cambridge, the market share of the United States in bitcoin mining has expanded to 37.8% in January 2022 from 3% in January 2020. The two major drivers of that gain were the ban that China instituted on bitcoin mining in 2021 and the emergence of publicly listed bitcoin miners. The eleven bitcoin-mining constituents of the Bitwise Crypto Innovators 30 Index already contribute over 15% of the total bitcoin hash rate. To put this execution into perspective, this level of market share implies the procurement, setup, and operation of over 300,000 mining machines.

Led by Listed Companies, the U.S. Increased Its Participation in Bitcoin Mining to Almost 40% 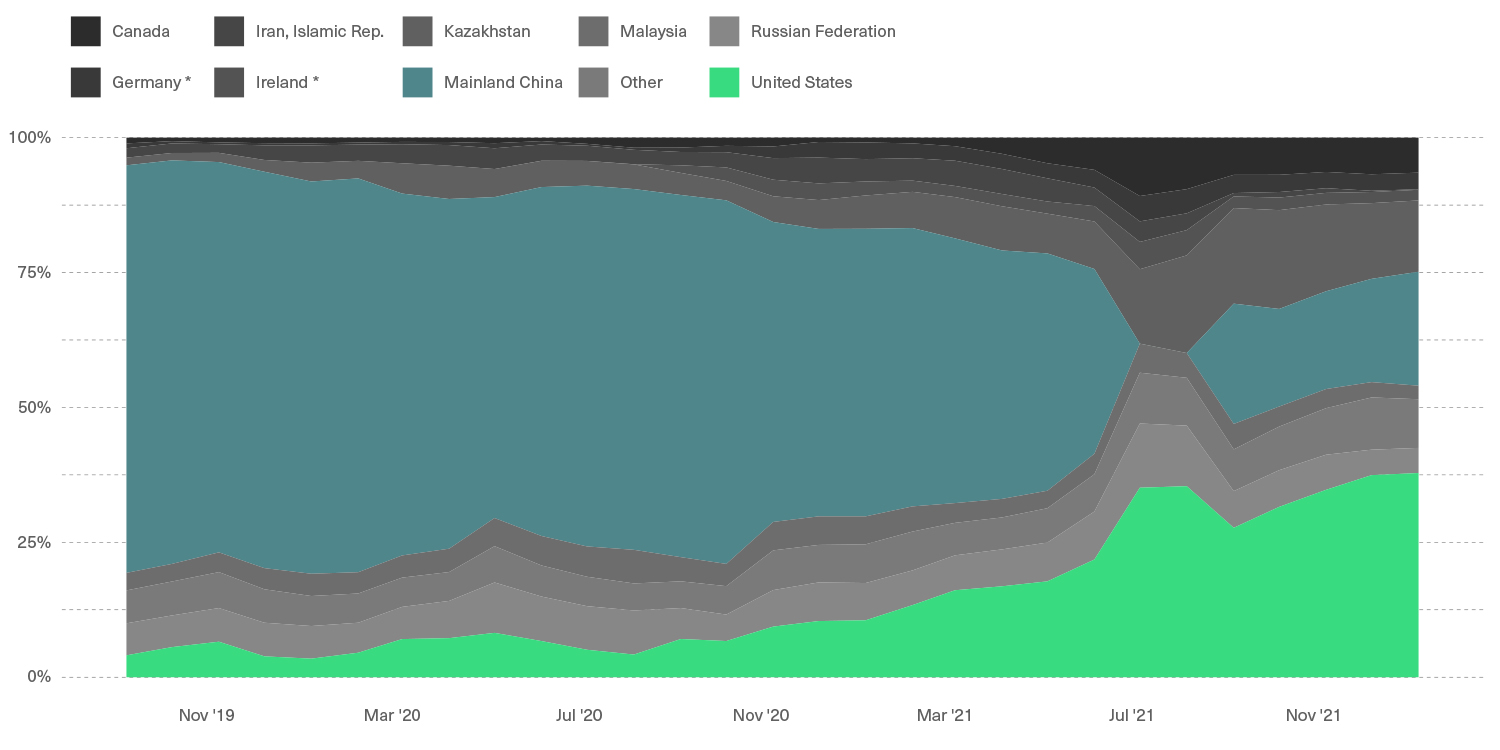 * To our knowledge, there is little evidence of large mining operations in Germany or Ireland that would justify these figures. Their share is likely significantly inflated due to redirected IP addresses via the use of VPN or proxy services.

Source: Bitwise with data from the Cambridge Center for Alternative Finance

This massive delivery hasn’t been flawless though: Many companies were guiding for even stronger hash rate growth until not very long ago.² The most likely reason why most companies did not fully deliver on their guidance are supply chain bottlenecks and getting the infrastructure (data centers, energy contracts, etc.) ready to turn the machines on.

Still, bitcoin miners are guiding for further hash rate capacity growth in the future, with many expecting to double or triple their capacity over the next 12-18 months. Bitcoin mining is now an institutional-scale business. Publicly traded companies are well positioned to thrive in this environment.

Once bitcoin miners procure the required specialized machines and secure a data center in which to operate them, the electricity cost to operate these energy-hungry machines is by and large their marginal production cost.

As of Q1 2022, the direct cash cost to mine one bitcoin varied between roughly $6,000 and almost $18,000 across the leading publicly listed bitcoin miners. These different cost levels depend on the level of verticalization of each miner and how old their machines are, among other factors. But overall, even at current bitcoin prices in the low $20,000s these companies can keep operating with some cushion to absorb equipment depreciation, head count, and other costs.

Despite the Strong Price Correction, Miners Are Still Able to Mine Bitcoin Profitably 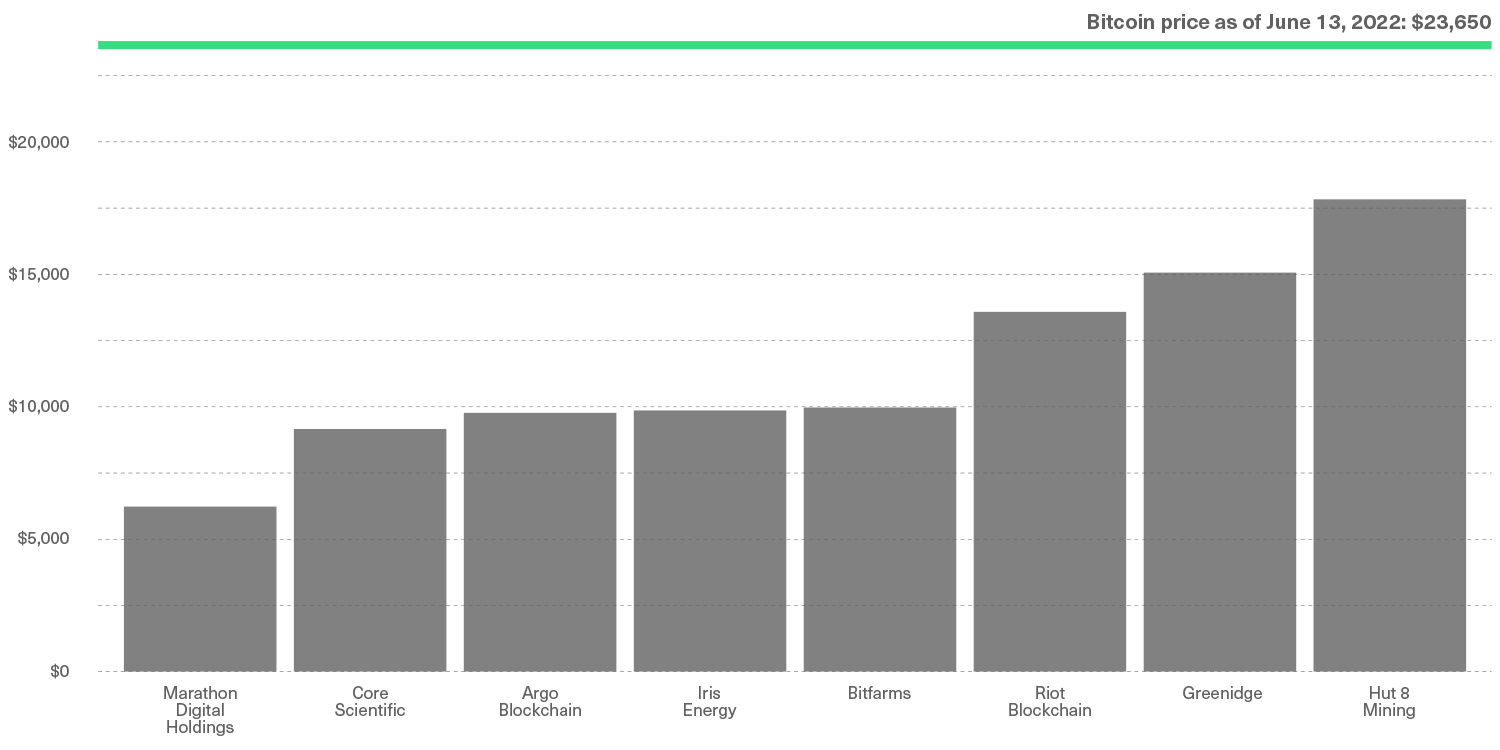 There are, however, risks to the maintenance of the current profitability levels. The most obvious one would be that bitcoin prices could drop further, which could potentially trigger the less efficient operators to start shutting down their machines.

Another important one for longer-term investors is that in mid-2024, bitcoin will undergo another “halving,” with the number of newly minted bitcoin per block falling by half. Historically, these halvings have aligned with periods of strong bitcoin price appreciation, which has more than offset the reduction in the number of bitcoin mined. But if that does not occur, the industry’s profitability would be under pressure.

No sector within crypto has raised as much new capital in public equity markets as bitcoin miners. This makes sense, as few other financing options can be this effective for capital-intensive companies that can enjoy significant potential for economies of scale and are looking to grow fast.

As a result, most bitcoin miners currently boast quite underleveraged balance sheets. The 11 bitcoin miners of the Bitwise Crypto Innovators 30 Index had a median net debt to equity ratio of -5.39% as of Q1 2022. The negative sign means they currently have more cash and equivalents than debt. As the chart shows, if bitcoin miners were an industry of the S&P 500, they would be the most underleveraged by far. Importantly, these figures do not consider the bitcoin they hold in reserves, so this is a conservative picture.

If Bitcoin Miners Were an Industry of the S&P 500 Index, They Would Be the Industry With the Most Underleveraged Balance Sheet 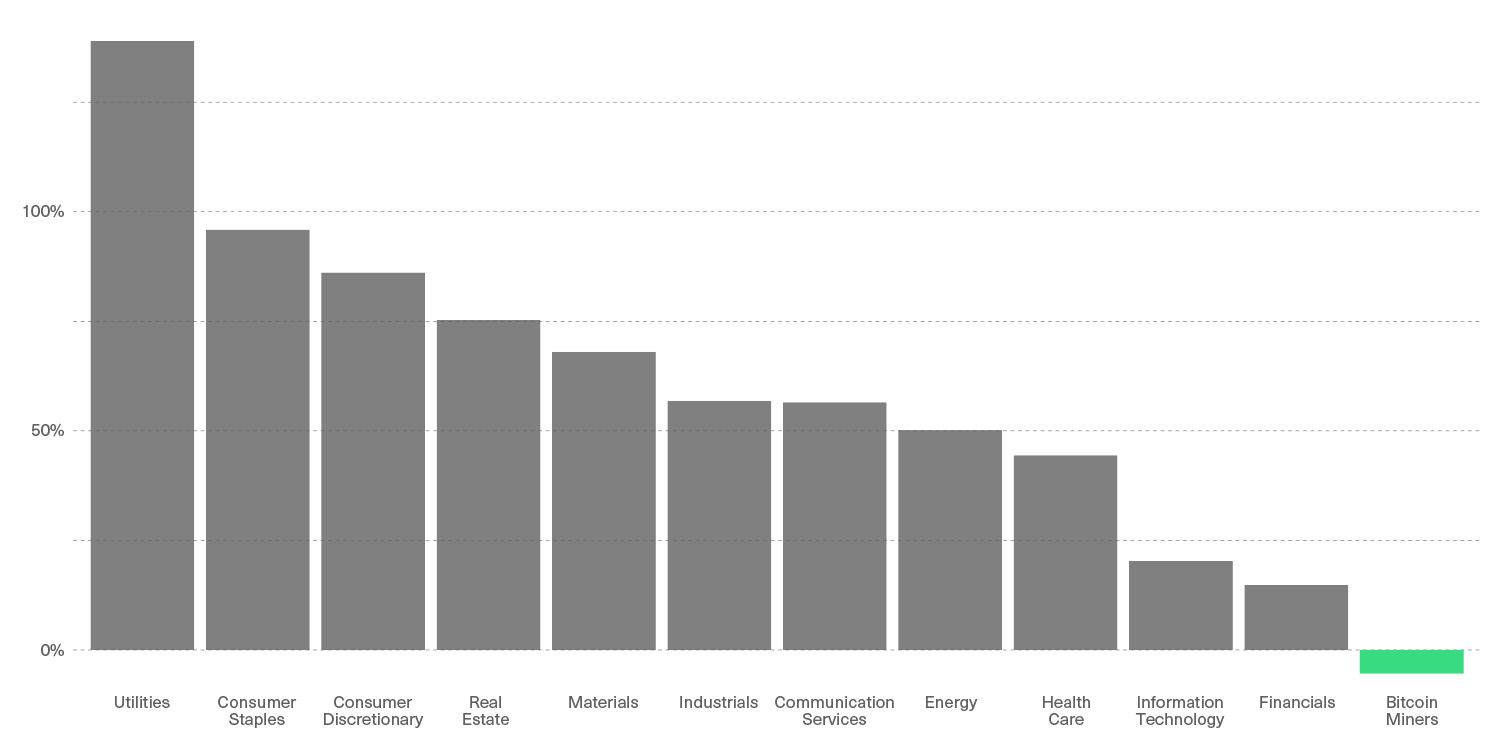 Of note, some miners have other commitments that should be considered. For instance, many have precommitted to buying new mining equipment in the future and a portion of their debt is secured by bitcoin held in reserve, which is now worth less.

As a result, many miners—listed and not listed—have already either announced or guided for selling some of their bitcoin reserves to keep a more liquid balance sheet. As the chart below shows, the amount of bitcoin sent from mining entities to exchanges (most likely for sale) in 2022 is at a multi-year high.

Bitcoin Miners Have Been Increasing Bitcoin Transfers to Exchanges, Likely to Sell

60-day moving average of flows from addresses within one hop of mining entities to exchanges, in BTC 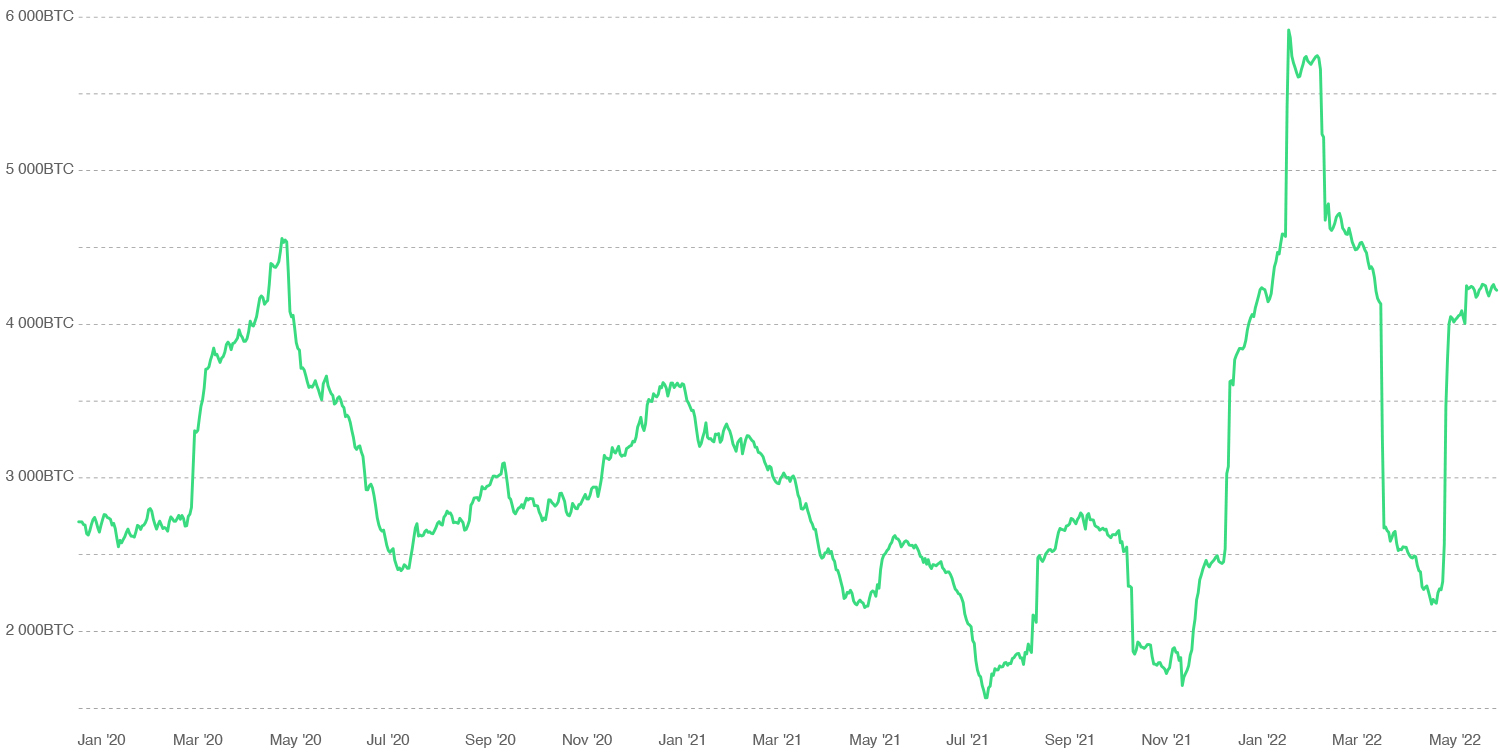 All Together, Opportunities Appear to Outweigh Risks

Bear markets are not easy times for bitcoin miners, but the ones who manage to grind through eventually emerge stronger and well-positioned to reap exceptional profits when the cycle turns.

In our view, many publicly listed miners are good candidates to be part of the winning group that will emerge stronger. This is certainly not without risks, but their capacity to execute well to keep expanding their market share of the total network hash rate, retain profitability levels to sustain operations when bitcoin's price is under pressure, and benefit from deleveraged balance sheets to keep investing during the bear market cycle leads us to believe that opportunities outweigh the risks at this point.

(1) For those willing to go deeper into the economics of bitcoin miners and its context within the broader bitcoin network, the first chapter of this piece covers it in detail.

(2) To use some of the largest bitcoin miners as examples: Riot Blockchain (RIOT) was guiding for a hash rate of 3.7-4.0 Exahashes per second (EH/s) throughout all of 2021 and delivered 3.1 EH/s; Marathon Digital Holdings (MARA) was guiding for 10.4 EH/s for 2021 in February of that year but ended up delivering 3.5 EH/s.

Bitcoin ETFs and the Path Forward for U.S. Crypto Investors